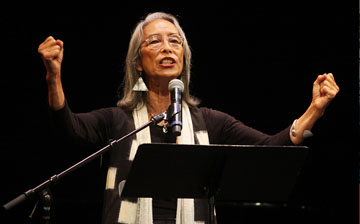 “WHAT A SONG CA DO”, A multi-media performance/lecture

Nobuko Miyamoto found her song in the whirlwind of change during the 70’s birth of the Asian American movement. The spirit of that moment was captured in “A Grain of Sand,” the album she created with Chris Iijima and Charlie Chin. Their music galvanized young Asians and built bridges between Latino, African and Native Americans.

“What Can A Song Do” is the story of Nobuko’s journey following her song through the dynamic backdrop of social change – from Japanese relocation to the Civil Rights, Black Power and Asian American movements, from the Vietnam War to post 9/11, from political activism to spiritual engagement. Nobuko’s interactive performance passes on a rich legacy to the next generation, with ways to think about their own song and how they will use it to create the kind of world they want to live in.