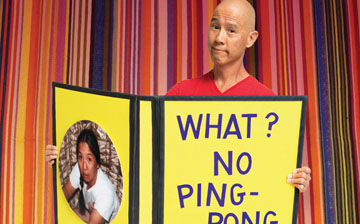 PERFORMANCES have been a mainstay of Great Leap’s work since its inception, playing to hundreds of colleges nationally, and schools through the Los Angeles Music Center On Tour program. Our present touring works include:

SLICE features Great Leap’s critically acclaimed solo performers who take audiences across societal borders, giving voice to unheard stories and revealing the commonalities and connections between us all. This show has successfully toured hundreds of colleges nationally and internationally, and is seen yearly by UCLA’s medical students on their first day of orientation.

2 – “WHAT CAN A SONG DO”  is NOBUKO MIYAMOTO’s multi-media lecture/performance in which she uses the songs of her life as an artist and activist as a window to the past and a way to envision the future. She tells the stories behind the songs of A GRAIN OF SAND, which helped propel the 70’s birth of the Asian American movement.
She speaks of her continuing path as a songwriter and theater artist to empower individuals and communities to find a voice for their stories.

From her days as folk singer/troubadour to her environmental music videos, she continues to use the power of song as catalyst to activate, build community and realize our interconnectedness with each other and the Earth.

Dan teams up with world-reknowned taiko artist, Kenny Endo, in a moving, insightful and hilarious tribute to Kwong’s late mother, Momo Nagano. It’s the tale of a JA woman from “the greatest generation”, living life unapologetically as a single parent and artist, joyously defying society’s limitations, improvising as she goes.

With a steady compass for social justice, a keen eye for irony and a flair for the absurd, Kwong traces Nagano’s journey from all-American girlhood in Los Angeles to WWII internment camp; from defiant marriage with a Chinese immigrant to single divorcee with four young kids; from urban housewife to Venice Beach artist. As Nagano’s path traverses the terrain of the Civil Rights Movement, modern feminism and hippie counter-culture, we witness this woman’s stubborn determination and fierce motherly devotion.

Along the way Kwong shares his experiences as the only son, providing his signature comedy through puppetry, props and song – and, as Nagano herself has a sense of humor that shines throughout — demonstrating that the apple doesn’t fall far from the tree.

In researching single motherhood, Kwong was struck by the absence of Asian Americans in any data; an invisibility which resonates with much of the Asian American experience in general. By including video interviews with other Japanese American single moms from the 1960s through today, Kwong weaves the uniqueness of their experiences into the show while revealing commonalities from their cultural background.
WNPPB is rich with multimedia: home movies, animation, documentary footage, archival family photos and period television clips, all transport the audience into the world of an unusual woman and her creative version of family.
Immensely entertaining, WNPPB also informs and educates about Japanese-American internment; single Asian American mothers of multiple generations; the evolution of contemporary women’s rights and the American family.

With humor and insight, MOTTAINAI, YO! takes a look at attitudes about recycling, reducing waste, and transforming the way we move through our city.

Nobuko portrays a trio of characters: Margaret, the conniving Goddess of Garbage; Baa-chan, her fretful eco-conscious sister; and The Bike Fairy, a cheery urban-cycling advocate. Dan appears as Mr. Mottainai, the fix-it guy who can’t bear to throw anything away, and Styro the plastic puppet who lives in a recycling bin.

Interspersed between live scenes and screenings of three of Great Leap’s Eco-Vids — B.Y.O CHOPSTIX, MOTTAINAI, and CYCLES OF CHANGE.